Chrome’s default file manager is a well-rounded solution for navigating across the directories within the Chrome OS filesystem. It’s however handicapped in terms of its ability to properly navigate the Linux directory contained within the system. Below are file managers that you may consider as a temporary solution until Google makes the experience of navigating your Chrome OS file-system seamless in its entirety or if you just care for a more traditional Linux experience.

Nemo as a file manager is a fork of Gnome files (previously Nautilus) and is traditionally bundled with the CInnamon desktop environment. It comes standard in the Ubuntu-based distro, Linuxmint as well several other Debian/Ubuntu-based distros. Nemo is an open-source project that is developed and maintained by the Linux Mint team.

Nemo is available in the standard Debian repository within the Debian-Linux container in Chrome OS and can simply be downloaded by entering the commands below in the designated Linux terminal.

This is a popular file manager that ships as a default in many desktop environments like XFCE, LXDE, as well as a ton of Linux distros. It’s an open-source project as well and was originally written using the GTK+ 2 toolkit and was subsequently ported to the GTK+ 3 toolkit.

It is also available in the Debian repo and can be downloaded with the command below.

This is a file manager that was built solely for the Gnome platform but does however function and comes as the default in several distros (most of which run the Gnome DE) including Ubuntu.

The file manager is still commonly known as Nautilus and can be installed using the commands below. When you’re done installing, you might want to consider themes for your Linux applications in Chrome OS as well as app stores.

Have you tried any of the above file managers in the past? If so, share your experience with us as well as any difficulty you might encounter. 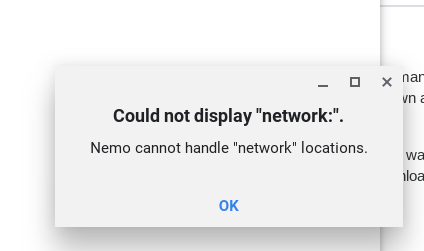 Why is this a problem on to use my network on my chromebook with Neo, trying to connect to my Nas and android tv box
application is running on chromebook fine

Hi Alex! You might be missing a package: try entering the following “sudo apt-get install gvfs-backends” in your Linux terminal…hope that works!