How to set up Flatpak in Chrome OS

The Linux environment within Chrome OS has become a blessing in disguise for enthusiasts and power users looking to migrate their workflow to Chrome OS. This has become possible without the hassle of having to install Crouton on the side like the job that you hate and can’t rid yourself of cause it makes you money.

We had previously covered our suggestion for the top alternative app stores for Chrome OS that will enable you to explore the desktop-grade apps that have become available to you via the Debian-powered Linux container. The recommendations we made in that article, however, are limited to the traditionally-packaged Debian Linux apps with no option for Flatpak. It’s for this reason that we’ve decided to create a tutorial on how to set up Flatpak.

Flatpak is a superior package management system that is literally second to none as it’s distribution-agnostic with a set of robust functionalities to boot.

This is such that the package management system does not require apps to be recompiled for every single Linux distribution with a difference in its core base. It’s essentially a one-fits-all solution.

Moreover, It is also such that Flatpak enables apps to be bundled with the required dependencies needed for them to be run efficiently on all platform.

Furthermore, Flatpak offers a centralized repository called Flathub for all distributions including the Chrome operating system.

Additionally, Flatpak offers the advantage of forward-compatibility and quite frankly, backward compatibility as well. This is particularly advantageous for the Chrome operating system as you can be that your applications will continue to function irrespective of the changes made to the Linux container (I would hope).

Lastly, Flatpak boasts consistency in performance across platforms which is necessary for troubleshooting.

Running the following commands as root in your Linux terminal will enable you to install Flatpak itself and the necessary dependencies.

The following command below will add the Flathub repository.

Once you’re done adding the repo, restart your system and proceed to the terminal to install any app you might need using the commands below. It’s also important that you look up the app you intend on installing on Flathub to be sure of its availability in the repo.

To run the app, use the command below or search in the app launcher.

Have you had any luck setting Flatpak up? Let us know in the comments!

Hello, so I’m trying to install flathub repository, but it’s not working…. Its saying ” ERROR: NAME must be specified” I don’t know what this means. I even downloaded the link and it doesn’t help.

Hi Peter! Can you tell me how you’ve gone about the process so we can better diagnose the problem you encountered? In order to install an application from the Flathub repository, you must specify the package name … can you verify that you’ve done this?

So thanks for helping!! I did steps 1 and 2 and they work but when I go on step 3 I do that command and it says “Name not specified.” then I downloaded the link and redo step 3 and says the same. Doing the command to get the Flathub repository doesn’t work. Any Help?

Could you possibly share a screenshot of your terminal?

So I can try to recreate the issue you’re experiencing. I don’t suppose Flathub will list a package with non-working repo … I’ll be sure to try it out on my PB once I’m back home

ahh thanks for helping I didn’t do the full command, my bad but its all good now

Hey there!
Ive been trying to get the flatpak thing to work on my chromebook book. But i cant seem to get it working. I was having the same issue NSH was having and i still cant get it to work. Ive followed the exact steps as listed on top. Any idea what im doing wrong? Using a google pixel Slate.

Hi Eddie! Have you tried power cycling your Pixel Slate and going through the process again?

No. I will try that next.
Do you think it can be because im running the BETA version of Chrome os?

i don’t suppose that’s the case, Eddie! Granted, the beta and dev channel do come with more bugs than usual and that may be the reason why you had run into issues with your installation. Typically, a quick restart will (temporarily) fix minor bugs. Let me know how it goes!

Hey there. So before i do the reset i want to show you how im typing it in the command line. Maybe im going something wrong. This is the error message ive been getting. 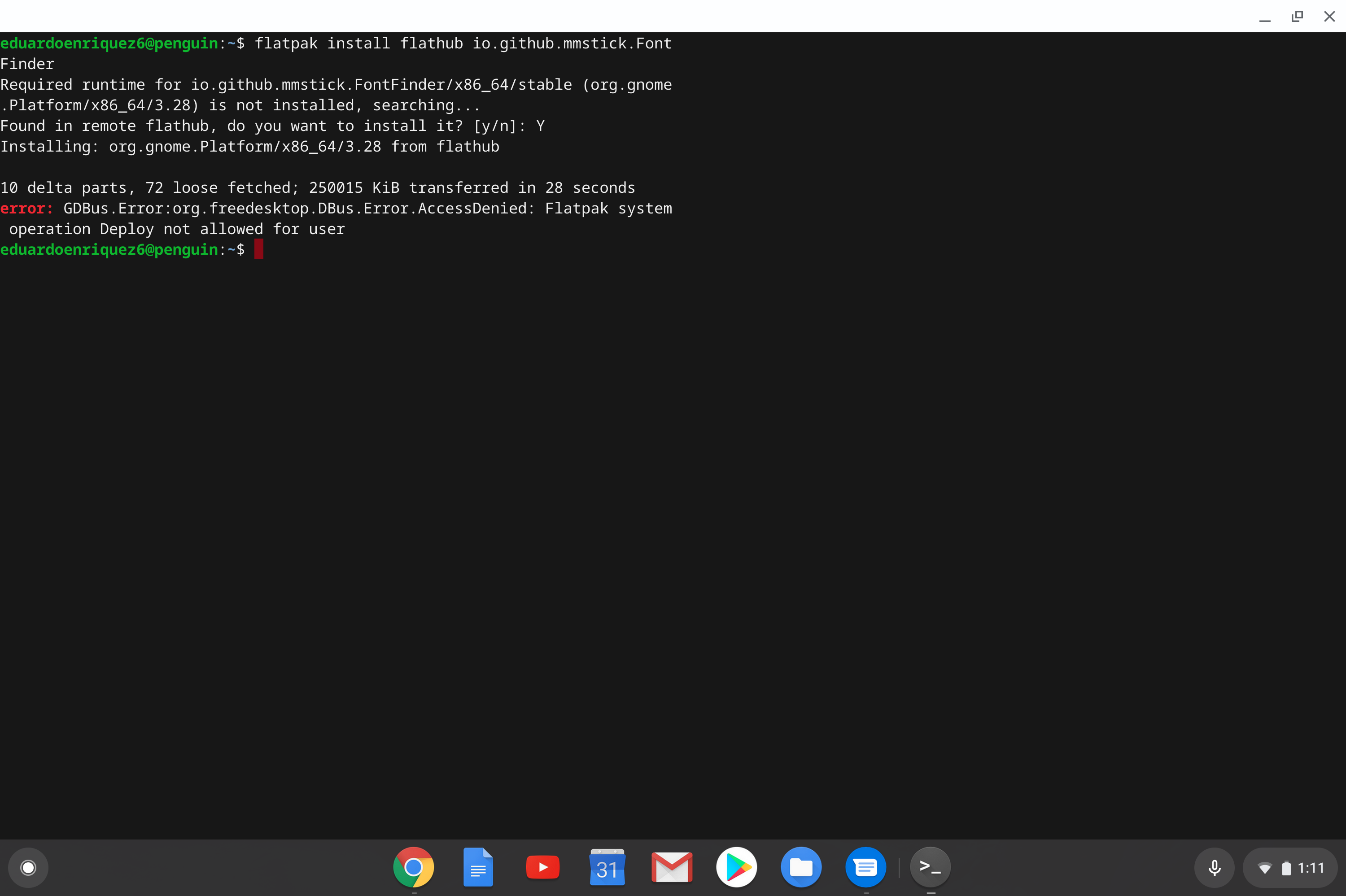 Happens to the best of us, fam! Good thing you figured it out! Enjoy!

Hope you’re doing awesome. I need a little help with AppImage files. Im trying to Run one on my Pixel Slate. But i have no idea how to do this. Can you help?
Im running Chrome OS Beta 75
and all ive done was move the downloaded AppImage file on to the Linux file section on the ‘files’ app.

Hi, Eddie! I’ll be sure to create an article on the subject and subsequently update you with a link sometime soon. Hang in there!

Cloudready is an entirely different platform from the traditional Chrome OS experience. I didn’t account for it while writing this article. I’ll, however, look into it once I get the chance to…